Breakbeat Lou along with his partner Lenny Roberts (R.I.P) have made a major contribution to the hip hop culture, being the founders of the legendary Ultimate Breaks and Beats compilation (in which every Hip Hop DJ should have in their collection). The Ultimate Breaks & Beats is a music compilation originally released on vinyl that consists of many of the breakbeat and unknown breakbeat anthems that Bambatta as well as many other djs used to rock out for the bboys back in the day. The UBB compilations are filled with bboy anthems such as Incredible Bongo Band “Apache”, Liquid Liquid “Cavern”, and Bobby Byrd “I Know You Got Soul”. These compilations have provided millions with the knowledge of the foundation of hip-hop music. Basically you could call the Ultimate Breaks & Beats the music bible of Hip Hop. Before being named the Ultimate Breaks and Beats, it was known as Octopus Breaks. Many recognize the octopus character on the early UBB record covers as a hip-hop icon itself. After a few years, they decided to change the name from Octopus Breaks to Ultimate Breaks & Beats to make their company more legitimate for production purposes. Not many know, but Lou and Lenny were also responsible for releasing 12″ records called Fusion Beats! Based on the same concept of UBB, they released a different breakbeats by different artist on both sides of the records. Not only has UBB been a major contribution to the DJs, but also to music producers. I think most people would agree that Lou and Lenny’s contributions have been a staple for music production in nearly all genres of music as well. Well enough said, here is the interview!

Lean: First and foremost, it is an honor for you to do this interview with me. To many and myself you are a “Breakbeat God”. Definitely an influence to millions, and most people don’t even know it. Anyways… I know it was a normal thing when your were growing up to have these park jams or block parties in your neighborhood (with DJs and bboys doing their thing).. but do you remember the first park jam or party you attended where you witnessed what we know as Hip Hop now? What really gravitated you to this culture?

Breakbeat Lou: WOW!!! It had to be like 1973.. I was at Webster Park on 188th St right off Fordham Rd in the Bronx with the Paradise Crew. This happened like right after Herc rocked at 1520. Now as far as what gravitated me to the culture, I think any true hip-hop head will tell you it was just part of our life at that time living in the hood. Most of the youth in my hood were into graffiti and the music was always a part of the streets. We had block parties and house parties going all the time… So you already know bboys would be dancing and battling at the parties. I wouldn’t battle too much, but I used to break! Eventually with time I got into deejaying and buying records.

Lean: I wasn’t thought of or even an idea at the time, but I always heard that it was very difficult to just go to different blocks in NYC. Did you actually get the chance to go to different areas of the Bronx or different boroughs to check out different park jams?

Lou: Mos Def! I would mainly go to jams in the Bronx and Manhattan though. In my hood, Grandmaster Caz and of course Herc at Sedgwick were the dudes! 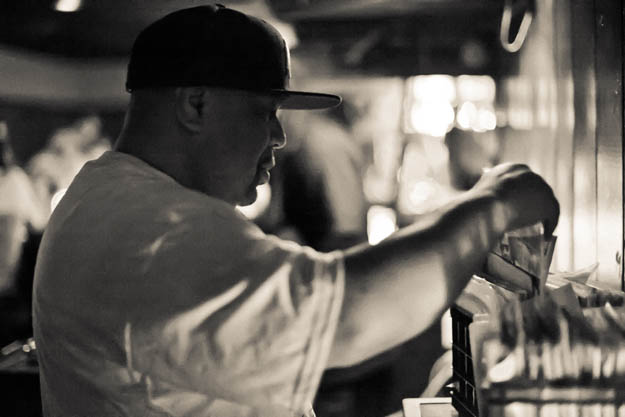 Lean: We both come from Latino families, and I think we can both agree that we love the sound of percussion. What was your first initial reaction to when you heard someone rocking out a “breakbeat” for the first time?

Lou: When I first heard the breakbeat my reaction to was to dance. I was a b-boy before anything you know.

Lean: Since you were a bboy before you got into deejaying, who were some of the influential bboys in your area? Who was your favorite dj to get down to?

Lean: Technology has obviously improved over the years. When did you get your first set up, and what equipment did you use? How was it practicing on your equipment back then compared to practicing with a new Rane Mixer and newer Technics 1200 model?

Lou: I used the technics SL-1100 & the Bozak CMA-10-2DL which were the ones that the crew had. In 1980, my brother-in-law bought me my own set, which were the technics slb-101 and a numark dm-500. Your mixing skills had to be on point because you had very little pitch control. In addition, you had to know how to throw the records in because the slb-101 belt drive would drag if you didn’t know what you were doing.

Lean: As you were coming up, did you feel a lot of pressure being a Latino DJ in the hip-hop community? As far as Latino DJs in the Hip Hop community back then, were you influenced by Charlie Chase and Disco Wiz?

Lou: Yes, because most of us Latinos were b-boys, and many of us Latinos wanted to gain the respect. We really had to have our game on right. So I got into deejaying too. Wiz and Chase were the dudes that I most definitely looked up to… but there was also less famous Latino DJs in my area doing their thing. We had dudes like DJ Quick and DJ Cisco, just to name a few.

Lean: I’m sure there were many signature bboy anthems that you heard at every park jam or party, but which DJ’s really influenced the selection of UBB? Are there any breakbeats on the compilation that you or Lenny (R.I.P) put on UBB that may have not been played by any djs at that time?

Lou: No. Our vision and goal for the UBB was to reintroduce the new generation of DJs to the foundation of the culture they were becoming a part of. On the B-Boy tip we did not introduce anything new, it was more on the soul and funk side that we did.

Lean: You mentioned to me before that you would go all around the city and New Jersey to find records. What were some of your favorite spots to go digging at back in the days?

Lou: WOW!!! In the Bronx there was M&M (LBM) Records, Harmony Music (which is still around and has been there since 1958), Downstairs, Music factory (on 42nd St), Crazy Eddie’s, Brad Records (which was the ones that put out Catch the Beat by T-Ski Valley). In Jersey, there was Sound Express, Record City, Eclipse Records, and the Wiz just to name a few. If you really wanted to get dusty… we would go digging at the Salvation Army!!!!

Lean: It’s tough to find any gems in the dollar bins these days. I guess it’s tough to find gems anywhere though lol I still go out of my way to hit any spots there are records, because you just never know! I was just wondering what was the average cost for a record back then?

Lean: I loved looking at the artwork on the UBB record sleeves, and I always wondered how you guys came up with some of the ideas for the covers. What was the significance behind the different characters or themes you guys would chose for your record sleeves?

Lou: Our crew was in tune with the culture, and with each other. Kevin Harris was the man behind the artwork. He was Danny Dan the BeatMan’s (founder of Dusty Fingers) boy, and Beatman was the one that referred him to us. Kevin had some dope art to begin with, and he was a true hip-hop head! All we did was fine-tune some of his skills to reflect the UBB style!!

Lean: Since we are talking about the UBB artwork, I noticed on the 20th UBB volume record sleeve… the legendary Music Factory. Could you explain the importance of the Music Factory record store in Time Square?

Lou: Stanley Patzer was the main buyer/sales person at Music Factory. He was good friends with Lenny, he was the dude that we vibed with to compile the first 9 volumes of UBB. Stanley knew his records and was that dude that knew the music that was driving hip-hop. 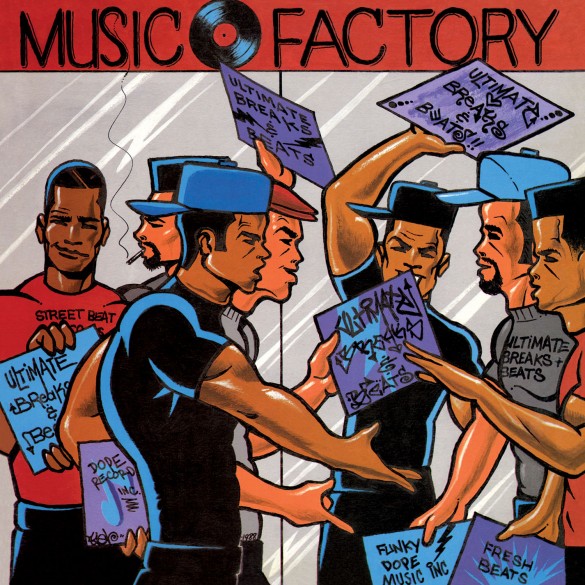 Lean: Now for people that don’t know… the pressings of 45s (7 inch records) are usually louder than pressings on a 12”. There are 45s of songs or versions of songs that may have never been released on a 12”. They can tend to be harder to find then a 12”. They are also more difficult to play out then a 12” too. There are a lot of people that are heavily into collecting 45s, like yourself (well I know you collect every form vinyl). Just out of curiosity though, did you really see a lot of DJs cutting up 45s back in the days? If so, who?

Lou: As far as my memory serves me, it was mainly LPs and 12” singles. We mainly rocked 7” when it was the only format we could afford. I can’t really remember anyone that just rocked 45s though. 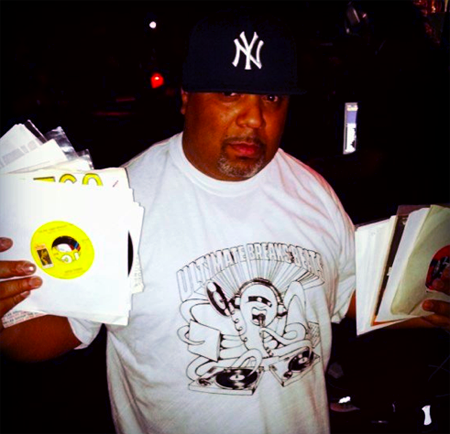 Lou: I think it’s very simple.. When you are truly a Hip-Hop head you have knowledge of all aspects.  If you don’t know much about the culture.. then you really ain’t Hip-Hop…let the chips fall where they may.

Lean: I know a lot of older cats like to give the younger DJs a hard time these days… rightfully so! What advice or solutions can you offer to the younger generation of DJs coming up?

Lean: If we wanted to hear you spin somewhere in NYC, where would we go?

Lou: Due to my schedule I can’t commit to any residency but I rock once a month. I have a night at CAMRADAS in East Harlem on 116th and 1st Ave with my dude Sucio Smash.

Lean: Every now and then I get a chance to watch your Ustream channel ultimatebreaksandbeats.com, Scratch’s website scratchvision.com, and the Beat Junkies Ustream channel ustream.tv/channel/beat-junkie-radio. I have to say you guys are doing beautiful things, and provide the best education a dj can get. I wish more people did watch you guys. I guess it will only get better though!

Lou: On the real I would like to thank God for the gift of music, the skills and knowledge to do what I do! My wife of 23 years, my three children, the late Lenny Roberts, the late Chep Nunez, the late Scott LaRock, and late Paul C. Definitely a shout to Eddie B. Swift, DJ Clear, and Kenny Dope for putting the bug back in my life to resurface. Special shoutouts to Boogie Blind, DJ Dummy, DJ Scratch, DJ Spinna, Lord Finesse, Sucio Smash, Rich Medina, Byze One, Rhettmatic, JRocc, Babu, Shorkut, Bobbito Garcia, G-Bo the Pro, DP-One, Lean Rock, Paulskee, Cros 1, Clark Kent, Da Beatminerz, Cosmo Baker, QuestLove, DJ Jazzy Jeff, Skeme Richards, Supreme Larock, King Otto, Destoyer and so many others!

Lean: Thanks again Lou! One love! 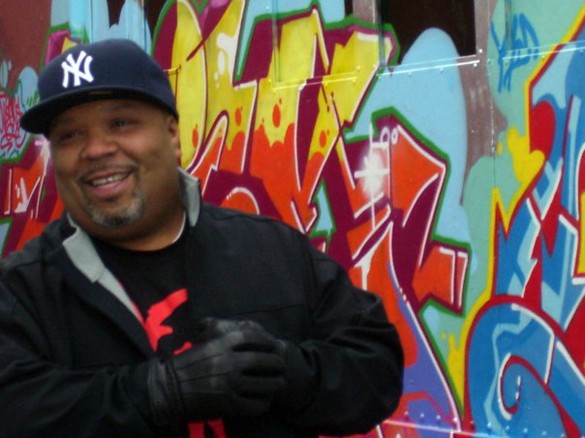 One thought on “In the crates with Breakbeat Lou!”